Probably one of the most unlikely cars ever to compete in international motorsport was the Austin Maxi. Desperate to rekindle the Rally glory of the Mini Cooper, British Leyland sent two works Maxi’s and 2 privateers into battle for the second ‘World Cup’ in 1970.

Puff the Magic Wagon, driven by three amazing women, was one of these cars. This is the story of how, original driver, Bron Burrell and Project Shop restored her and hit the international classic car rally scene nearly 50 years later.

Originally picked from the showroom floor in 1969 MCE 7G was a 1500cc version of Austin’s new Maxi! It was to be prepared by dealer group Marshalls of Cambridge for the hardest ever Marathon Rally the world had ever seen – The 1970 Daily Mirror London-Mexico World Cup Rally.  With over 100 cars starting from London, only the first 50 to arrive in Lisbon would be shipped to South America to continue the rally, and at the end, less than 25 cars were to complete the rally and enter Mexico City.

In 2016 Project Shop were asked to prepare ‘The Beauty Box’ a 1970 World Cup Rally Car originally driven by Jean Denton, Pat Write and Liz Crellin for its then owner David Scothorn. David was to drive the car on the Terre Di Canossa rally through the magnificent Tuscany countryside that year and met Bron at Race Retro.  In June 2016 Bron bought Puff and a plan was hatched to restore her so she could be raced in endurance rallies once again. Before the end of 2016 Bron had booked Puff up for some static events including the NEC Classic Motor Show. Although Puff had to stay in one piece for this period, we had some time to assess her condition.

It was clear from the outset that if Puff was any other Austin Maxi then it would be time to put her to rest.  Although she looked presentable, her mechanical and structural condition were anything but.  Every rubber component on the car was completely shot. The fuel tank was disintegrating, the brakes were seized solid, the hydrolastic suspension leaked from every joint, the electrics were rodent damaged, the engine was tired and the gearbox syncros were shot.  Added to this there was a lot of rot in the inner and outer sills.

We set about breaking down each of the problem areas, making countless lists of parts and reconditioning jobs that needed to be taken care of before the car could be put back together.

In the meantime, the engine and gearbox were rebuilt in house by the two Johns and all the subassemblies got ready for the rebuild. Zane, who was a new member of staff at that point rolled up his sleeves and with a very tight deadline started rebuilding Puff. The plan was for Bron to ‘relive’ the first stage of the World Cup by taking part in the London to Lisboa Hero endurance rally, which took part in the last week of April, before this she had booked a ‘trial rally’ on the Isle of Mann and had press and filming days planned. In the end Zane had just 4 weeks to get the car from an almost empty shell into a car that could drive 2,500 competition miles in one hit.

We knew Bron was a force of nature from the outset, but I don’t think that one of us realised how much energy she had, or how many events we were going to end up competing in together! In their first full year back in the car, Bron, Tina (Tina only ‘competed’ on the London-Lisbon, and rode in Puff at Race Retro and FoS) and Puff competed in: 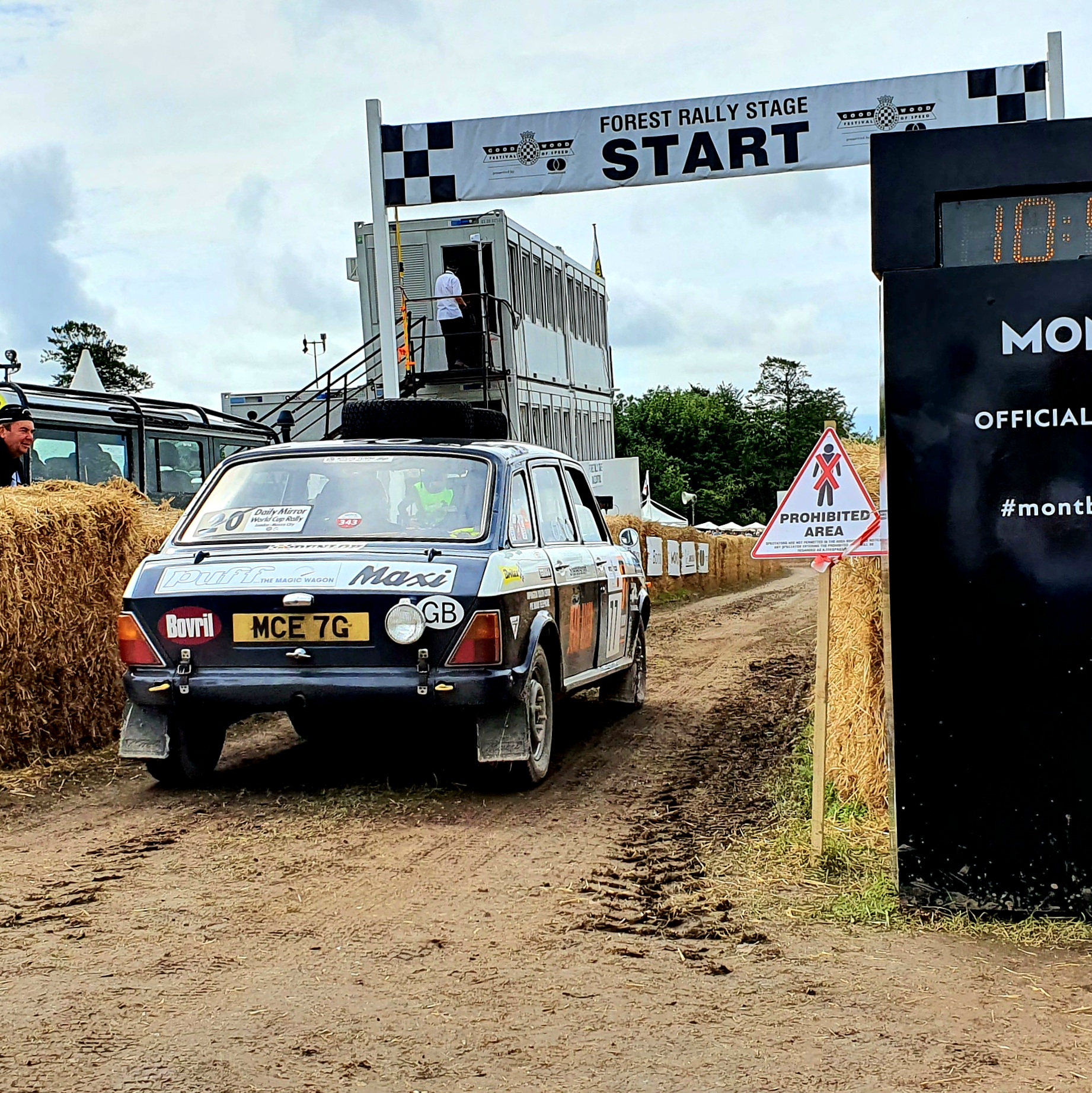 It would be fair to say that 2017 was a baptism of fire! We learnt a lot about, not only preparing a rally car, but preparing classics for endurance and reliability. Puff finished every event, but they were not without their problems.

If we thought 2017 was going to be busy, then 2018 was flat out. Between February and November Bron and Puff with Tina and other guest navigators were out 12 times competing in the following events:

After every event we used the knowledge we had acquired to make small changes to Puff. We wanted to make her competitive, strong and reliable, but not at the expenses of her history and provenance.

Bron’s stated aim, right from day one was to complete the 1970 World Cup Rally.  Originally Puff had finally broken down in Argentina. Unable to continue, the ladies had to find their own way to Mexico, leaving the little Maxi to be recovered at a later date. The idea was to organise a historic rally that would see Bron, Tina and Puff reunited with other competitors to relive the event 50 years on.  Because of all the planning 2019 was going to be a less arduous season, but we still managed 5 events:

After a lot of preparation in 2019 we were ready for Puff’s BIG BIRTHDAY! Sadly it was not to be, there had been difficulties getting the relevant permissions to run a competition event in South America and then, just after Race Retro in February COVID-19 hit the world.  Race Retro would turn out to be our last event till HERO Summer Trial in Telford and then Goodwood 2021.

What Our Customers Say

Project Shop rebuilt my Triumph TR6 chassis and body, which was an extensive job as it was a wreck. Several other workshops had looked at it and declined to take it on, but Simeon and his crew took a different viewpoint. I now have a car body and chassis, that although are 49-years old, the whole thing looks brand new. The attention to detail, and the efficiency with which the work was carried out, was outstanding. Highly recommended!

I took my brand new replica vintage car in to the Classis Project Shop for a tune of its carburetors as it wasn't running as well as it should. I was aware of some other niggling problems but took very little heed of them. A very detailed examination of the car was clearly carried out and there were a number of issues discovered. Some I was aware of and others I wasn't. What I got back was a car that was no longer 85% right - it was 100%. This gave me a huge amount of confidence in the reliability and safety of the car going forward. This company is extremely professional, with experienced and courteous staff and represents excellent value. I would certainly very highly recommend them.

I can’t recommend Project Shop highly enough and have used them multiple times in the past 4 years. Highly experienced classic car mechanics/engineers with a can do approach and encyclopaedic knowledge of how to repair/fix any problem – this is so critically important, is virtually impossible to find these days and saves time and most importantly money. Very reasonable hourly rates when you consider what you are getting and they seem to actually care about the car a great deal. All aspects of a project are discussed in detail before any actual work/repairs are commenced and the customer is kept regularly informed, the communication really is excellent. You are invited to visit and inspect the vehicle for yourself if an when an issue crops up and are made to feel most welcome not to mention the invaluable advice given on how to best maintain your vehicle moving forward. Without doubt one of the best classic car specialists in the country.

Owning a classic car is a combination of excitement, joy, pride and, mostly, frustration. The team at CPS share the first three and help to take the sting out of the fourth. Simeon is always available with good advice, sympathy and a willingness to go the extra mile to keep a car at it's best. His team look after the vehicle as of it is there own, and no detail is too minor.

A professional and detail orientated team, with extensive knowledge and experience, and a pleasure with which to deal.

A real delight to find people who love their cars. They have an encyclopaedic knowledge of the past and present issues surrounding the motor vehicle. A welcome change from the motor dealerships that don't care much about "old" only value "new" and think that they part of a car service industry whilst their only concerns are profits and sales targets.
From my own experience, Simeon and his team are a pleasure to deal with, since I was introduced to the Classic Project Shop my "Aston" has never run so well

Driving Puff yesterday was amazing - she felt like a new car again. Thanks to all the guys who have worked so hard to make this dream of mine a reality. And Puff thanks you too!

Did a fantastic job on my Goddess, running like a dream! Really enthusiastic bunch of people who know their stuff. The commitment and customer service is second to none and they will always be my first port of call from now on. Thank you.

Kind, reliable and so helpful. I had purchased my first T25 camper and they checked it over thoroughly, explaining everything to be done. Simeon was attentive and never made me feel out of place or awkward. Answered all questions and found the best solutions. Personal and caring service and excellent work, even helping me by phone when I was stuck in France with an oil leak! Superb people. Cannot praise their professionalism enough.

A great bunch of dedicated people who have a passion for cars.

Had a good look around whilst on a breakfast meeting and was very impressed. Well done.

Great bunch of lads and only too happy to help and offer advice.

I’ve not, in 52 years of motoring, had better service. Collection and delivery of my car, swift diagnosis and cure with excellent value for money. A group of very personable people who share my enthusiasm for motoring, I’ll use them again without a second thought. Thank you, Guys, I’ll be back!

The quality of the work and the people. Update! Been back again and just as happy. The team is talented and professional. They can have my Classic Mini next. 100% Recommended.

Driving Puff yesterday was amazing - she felt like a new car again. Thanks to all the guys who have worked so hard to make this dream of mine a reality. And Puff thanks you too!

Virtually replaced evety section of the inner bodywork of my Triumph TR6, and parts of the chassis. Didn't muck about, but just got on with it and did a great job. I will always go back there - every time. No question.