The last word in electric cooling

If there isn’t one to fit your car, then their range of adaptable products will allow us to make one for you. If you are looking to replace your mechanical fan, upgrade one that is not quite powerful enough or add to your cars cooling capacity then you won’t do better. Here is why… 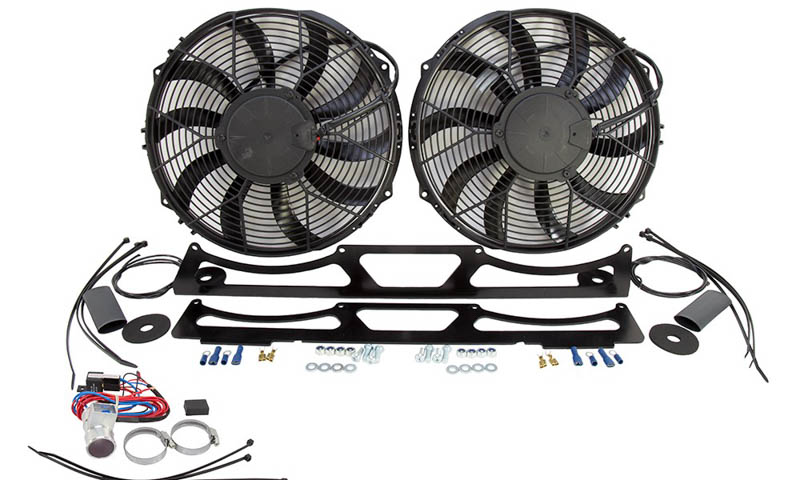 If there is one area where cheap, useless upgrades are more prevalent we are unaware of it. eBay and even some respected parts companies are awash with cheap electric fans with nasty plastic clips that push through the core of your radiator. But before we get into why most kits are terrible, why do you need one in the first place? Often the answer is that you don’t (most of the time).

If you are struggling to keep the temperature down in your engine bay during normal driving, then there is another problem a foot. Before buying a fancy kit let us check the whole of the cooling system first. Ninety five percent of all cooling problems that we see in the workshop are because of:

Having made sure that all of the basics above are covered first there are a number of very good reasons why you would want to fit an electric cooling fan kit. The best on the market are Revotec.

The physics of cooling an engine bay

Fans need two things to shift air. Speed and torque. The speed obviously moves the air, but it is the torque that is super important in car engine bay.  This is because they are pulling or pushing the air through a series of restrictions. Those being your radiator, oil cooler and maybe even an air conditioning unit. Directly driven fans have boat loads of both when you are driving along, but as your engine speed decreases so does the speed of the fan.

It is compounded by the fact that as you slow down there is less air pressure and you have heat soak from all the hot components such as exhaust and engine block. This is where an electric fan comes into its own. Because it is run off a separate motor it can still be working flat out when the engine speed is low, which is when you most need cooling performance.

Extra engine bay cooling is often needed because you have made another modification, such as a stainless steel manifold. Although great for engine performance a stainless steel exhaust manifold radiates heat at an alarming rate compared to a traditional cast manifold. Unwrapped, they can increase your engine bay temperature by up to 30 degrees just minutes after you have started the engine.

Five reasons why most cooling kits are terrible!

The biggest problem is that most cheap cooling fans don’t have very strong motors, so although they can theoretically shift plenty of ‘free air’ they struggle to suck or blow air through restrictions such as your radiator.

Most kit tend to have universal fans. That is, they are designed to be used as both push (in front of the radiator) and pull (behind the radiator). This is so the vendor can benefit from scales of volume. What it actually means is that the fan design is fundamentally flawed and will shift less air than a dedicated push or pull fan.

Universal fit fans are designed to be fitted directly to the radiator with plastic push through clips. This is the dumbest idea ever! The plastic clips damage the radiator core as you fit them. We are trying to improve the cooling system not introduce weakness.

The thermostats supplied are generally fairly poor quality and they work by inserting a probe into the top hose. They look messy and always weep coolant no matter how tightly you do up the jubilee clip.

Most kits don’t come with a wiring kit, but when they do they are woefully inadequate. Cooling fans take a big chunk of current. The wiring should be rated at a minimum of 30 AMPS and be fused, either to the cars fuse box or with a good quality inline fuse box. We see at least a couple of cars every year which have overheated because the wiring to the electric fan has melted.

The answer is a bespoke Revotec kit, correctly installed by Project Shop

The electric components are waterproof to IP68 standard

Available for both positive and negative earthed vehicles